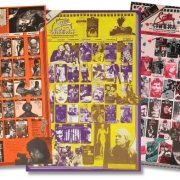 June is a very special month for the Scala Cinema. It was on 1st June 1978 that the Scala Cinema first opened its doors at its first venue, on Tottenham Road / Charlotte Road – 40 years ago.

And on 6th June 1993, the Scala – now at King’s Cross – played its final film, King Kong – 25 years ago. On Monday 7th June there was a final wake at the cinema, with staff, programmers, punters and supporters gathered to mourn the end of an era.

But 25 years later… the flame of the Scala burns bright once more, as Scalarama returns! This September, the month-long tribute to cinema will pay homage to its inspiration – the iconic Scala Cinema – in a series of events, including a return to the King’s Cross venue.

Now in its eighth year, Scalarama has grown considerably since its first outing in 2011 as Scala Forever, a two-month tribute to the Scala featuring 35 different London cinemas. Now there have been over 700 different exhibitors involved from across the country. Find out how to get involved this year, and join the party this September.

Dear #Scalarama friends, what are you planning for the September cinema celebration?

Have #DirectedbyWomen related activities planned? I'd love to add them to the Worldwide Film Viewing Party global calendar. I look forward to celebrating with you!

Am I leaving any #Scalarama Twitter accounts out? I hope not! Let's celebrate together.

Very excited to announce our next screening at the @TownerGallery will be Jackie Chan's Armour of God II: Operation Condor! Join us on Saturday 24 September for comedy and action adventure mayhem!
Screening as part of the @Scalarama season: