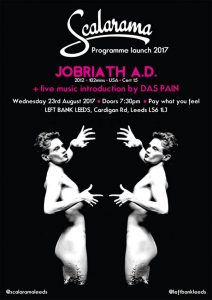 Jobraith is considered to be “the first openly gay rock star” and was dubbed “the American Bowie”. He was also, tragically, one of the first rock stars to die of AIDS.

He is an intriguing 20th century figure; his short career was preceded by incredible hype, with much of the publicity focused on his homosexuality rather than his musical talent. Dropped by his record company, he died in the Chelsea hotel in his 30s.

The film is narrated by Henry Rollins.

This will be the first chance to see the new 2017 Scalarama season trailer, pick up flyers and local guides.

Pay as you feel. No need to book.