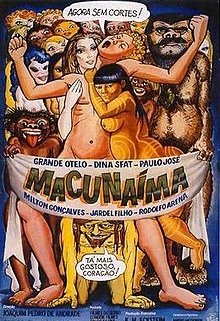 The second offering of this collection is comedy Macunaima (Joaquim Pedro de Andrade, 1969. Based on the 1928 book by Mário de Andrade, the modern-day parable follows the misadventures of Macunaima, a black man who is miraculously born to an old woman, who is supposed to be of the indigenous peoples of Brasil, in the jungles of the Amazon. Macunaima embarks on a quest to recover a magical stone from a rich city dweller. In this film, the essentialist myth of the 3 Brazilian races, white, black, and the original natives of Brazil, is supposed to be represented through the protagonist, his brothers, and his mother.

Throughout his adventures, Macunaíma learns some tough lessons about Brazilian life and society. Macunaima functions as an allegorical representation of the turmoil of the Brazilian military coup.

The film will be introduced by Dr Anthony Killick and we invite you to share your thoughts after the screening.